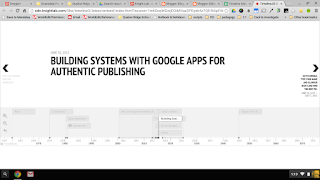 I promised the good folks who attended my session at ISTE (thanks for coming!) that I would update the Timeline Maker system for the newest version of Timeline JS. I wanted this version to be as accessible as possible so I built in a control panel to guide teachers through the setup process. This system uses a Google Form to create a beautiful interactive and embeddable timeline.

Timeline JS is a beautiful tool that transforms a Google Sheet into an interactive multimedia timeline. This system streamlines the process by using a Google Form to create the timeline. It also uses the incredible sheetSpider script, programmed by Andrew Stillman from New Visions for Public Schools. SheetSpider will create multiple timelines from the same form, making the system function for group work or individual students.

Set Up
First make a copy of the Timeline Maker. This was built for schools and assumes that you are copying it into an Edu Domain. As such, it has been developed to work with recorded usernames. This can be used outside of a domain, but will require some minor tinkering.

I really want to make this system as easy to use as possible. The sheetSpider script is powerful, but I think it can be confusing, especially if you want to control how it works. I created a “Set Up” sheet that takes teachers through the process step by step. Via this sheet, the system can be set up to create one timeline for the class, for small groups, or for each student. The “Set Up” sheet also allows teachers to turn on moderation, allowing submissions to be vetted before they get to the timeline. I’ve linked to two example sheets below, one set-up for small groups and another set up for a whole class. The data came from the good folks who attended my ISTE presentation.


What’s next?
I didn’t involve any scripts or add-on beyond sheetSpider in the effort to keep this as simple as possible. In future iterations I hope to do the following:

The time was right for this revision. The goal was to build a system for teachers who might not be Google Sheet ninjas yet, but still want Timeline JS goodness powered by a Google Form. This is the first time I’ve tried to approach a system this way, please let me know if it works for you!

Edit: Giant thanks to Dan Crowley and Kelly Kermode for their help chasing down some bugs. If you experience any trouble, please let me know in the comments. (7/28/2015)

Edit 2: Fixing old bugs made new bugs! Thanks to the help of Stephanie Schroeder I was able to debug them. Once again - if something doesn't seem right, leave a comment and let me know. Thanks! (7/30/2015)
Posted by John Calvert at 11:27 AM