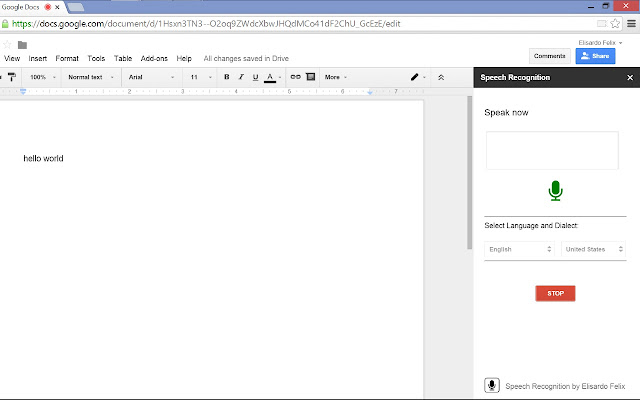 I’ve been looking for a free speech recognition tool to use with Google Docs since the unveiling of Chrome extensions. The time has finally come with the Docs Add-on “Speech Recognition.” I’ve used the tool with several 8 and 9 year old students and have found it easy to operate and remarkably accurate.

Speech Recognition appears in the Add-on menu after being installed from the Gallery.  Once started, a speech recognition sidebar opens that allows the user to specify the language being spoken. In addition to handling English well, I’ve heard from my World Language colleagues that the Spanish recognition is quite good. The Add-on begins to work with the click of a start button and stops by using the same button. Punctuation is included when the user verbally declares where it should be (edit: some folks have reported that punctuation is a weakness, see the comments...)

Accuracy has often been a challenge for speech recognition tools that aren’t trained to understand the speaker, such as the capable Dragon Naturally Speaking. Accuracy is also a challenge when the speaker has a young voice or doesn’t project well. I found neither to be the case with this add-on.  One soft-spoken young lady was having trouble typing the non-fiction book that she was working on. She was able to clear through three chapters after using “Speech Recognition.”

Students often do not verbalize the punctuation, so it is necessary for them to reread and make edits where necessary. Mumbling can also be misunderstood. I actually consider both of these deficits a feature and enjoyed watching our young writers reread their work and revise.


At the risk of being hyper-critical, I would love to see this add-on utilize keyboard shortcuts. I do not know what kind of technical challenge that presents, but it would be highly beneficial for users who have trouble manipulating a mouse. So far, this is my only criticism of this capable and user-friendly tool.

This has been cross-posted at the Chrome Toolbox.